The time require for a bacterium to give rise to doughter cells under optimum conditions, is known as generation time.

The generation time is most important in the bacterial growth. The time is required basically 20 minutes to 20 days for growth.

When a bacteria is inoculate into a suitable culture medium and incubated it’s growth follows a definite curve.

When a bacteria count of such culture is determine at different intervals and plotted in relation to time a growth curve is obtain.

The bacterial growth curve has different phases which are as follows- 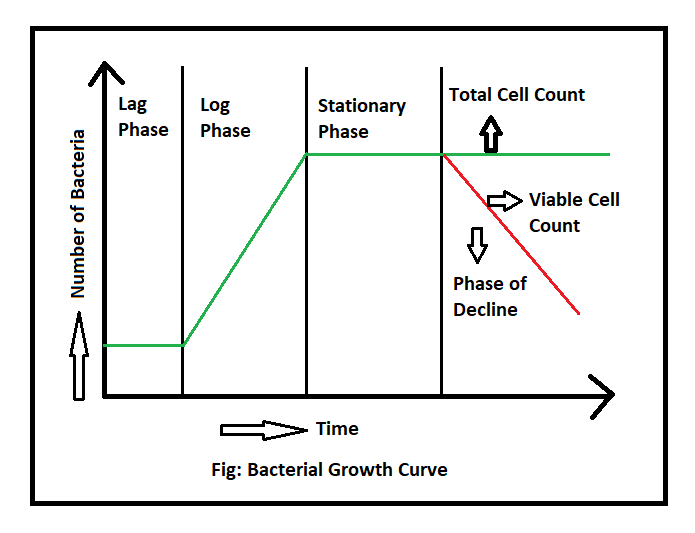 During this phase of the bacterial growth cycle, synthesis of RNA, enzymes and other molecules occurs. During this period the organisms adapt to the new environment.

Cell division starts and their members increase exponentially or by geometric progression with time. The actual rate of this growth depends upon the growth conditions.

If the logarithm of the viable count is plotted against time, a straight line is obtain. Exponentially growth can not continue indefinitely, however, because the medium is so depleted of nutrients and enriched with wastes.

After log phase, the bacterial growth ceases almost completely due to exhaustion of nutrients and accumulation of toxic products.

The number of viable cells remain stationary as there is almost a balance between the dying cells and the new form cells.

After a period of stationary phase the bacterial population decreases due to the death cells.

There is decline in viable count and not in total count.

Moisture is an essential requirement for the group of bacteria, because 80% of the bacterial cell consist of water.

On the basis of requirement of oxygen bacteria are divides into aerobes and anaerobes.

I. Aerobes- They require oxygen for their growth.

II. Anaerobes- They are growth only in the absence of oxygen.

Amal amount of carbon dioxide is required by all bacteria.

Most of the medically important bacteria can grow at pH 7.2-7.6, some bacteria such as lactobacilli and vibiro cholera grow at acidic and alkaline respectively.

Body fluid include extracellular and intracellular fluid and electrolytes and blood is necessary for bacterial growth.