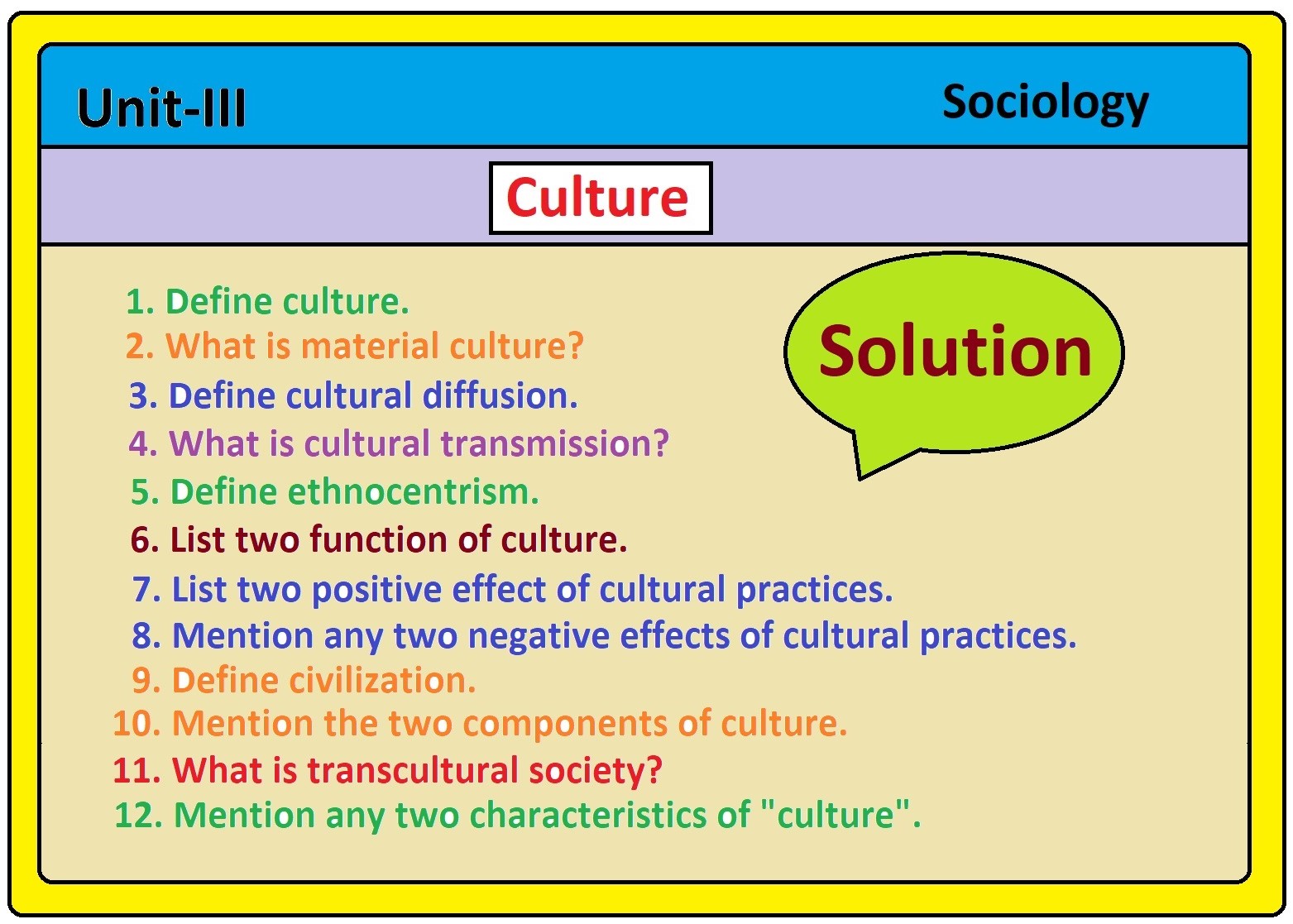 The term “culture” is derived from the Latin word “Colere” which means” to cultivate” or “to till the soil“. Initially the term had some reference to agriculture. The term is used to refer to the beliefs, values and expressive symbols of any group or society.

According to Edward Burnett Taylor, “The culture is that complex whole that includes knowledge, belief, art, morals, law, custom. And any other capabilities and habits acquired by man an a member of society”.

According to Ralph Linton, “It is social heredity which transfer from one generation to another generation accumulation of individual experience”.

According to John Beatle, “It is a way of life which transmitted from one generation to another generation”.

#2. What is material culture?

The material culture is reflex to production, consumption and technologies. It is helps the people physical and social needs. Its consists of manufactured objects such as tools, furniture, automobiles, roads, bridges, homes, schools and colleges etc. It is always outgrowth of non material culture.

Studying of physical objects of material culture gives us a better understanding and interacted with those object.

Every religion has their own culture, values and norms. Some culture are spread through the another religion (culture) by the people.

Cultural diffusion is the process which the cultural roles and regulations discovered in one society and then those roles & regulations are spread direct or indirect to other societies. It is separate from transmission of culture to generation. Although the exact origin of a specific cultural traits is difficult to trace. Most importantly known about the diffusion and then invented the culture.

#4. What is cultural transmission?

The cultural transmission refers to the information, values, traditions etc. which is transfer from one person to another. It is the learning process that is done by individuals who is adjusting new culture. which one culture role and regulation and theories and transfer to another culture.

The cultural transmission defined as ” the process of learning through which the values, standards, norms etc. of a culture are passed on to succeeding generations”. It is the knowledge that learned and transmitted to later generations.

It the learning process which helps to transfer information from one generation to another generation.

Ethnocentrism is a characteristic of the ingroup. It is the centre of the own culture. So, it is decide and justify the cultural norms and values.

It is “that view thins in which ones own group is the centre of everything and others are rated with reference to it”.

It is justify that the value, the way of life and attitudes of ones while those of the others are inferior and wrong. It also involves a double moral standard. Sumner writes two codes of morals and two sets of mores one for comrade inside and the other for strangers outside.

Function of cultures are includes-

For example, how individual behave each other.

Culture provide solution for complicated situations:- When the society individual having problem, that problem solution provide the culture.

Development of society:- Cultural Practices helps to develop the society.

Promote unity:- A unity of people can make a good society. Culture promotes the unity of society people and help each other.

It provide cleanliness:- Cultural Practices are promote the cleanliness. Now individual know how clean the society and spread the diseases.

Social control:- Cultural practices can also protect the social. Protection of social from the various diseases and crimes also.

According to Ogburn, “The civilization the latter phase super organic culture. According to methods of producing and using them whereas culture consists of the ideas, values and the mental and emotional aspects of a group”.

According to AW Green, “culture becomes a civilization only when it possesses written language, science, philosophy, a specialized division of labor and complex technology and political system”.

The term culture refers to ideas and techniques behind concrete objects, whereas civilization is a more complex and evolved from culture.

#10. Mention the two components of culture.

There are so many elements of culture includes-

#11. What is transcultural society?

Transcultural means the life style of people from different culture. It is a group of people living together in a society where people values, culture, norms, characteristic are same and interact with another.

The definition of transcultural society is a bunch of elements of various different culture.

It is describe as “extending through all human cultures” or “involving, encompassing or combining elements of more than one culture”.

#12. Mention any two characteristics of “culture”.

There are eight characteristics of culture includes-

2 thoughts on “what is Cultural Transmission?”